In October, Ali Wolf, who is the Chief Economist at Zonda, gave a webinar presentation on housing market trends. One of the factors she discussed was sales rates by housing price bracket (low, middle, and upper), which is our focus in this article. Towards the end, we’ll touch on builders’ incentives — which affect, and are affected by, sales rates.

Over 50% of builders reported that demand in September was “slower than expected and causing concern.” That split down the middle is reflected in the data. Half of the major markets have lower sales rates than in 2019; half have higher. 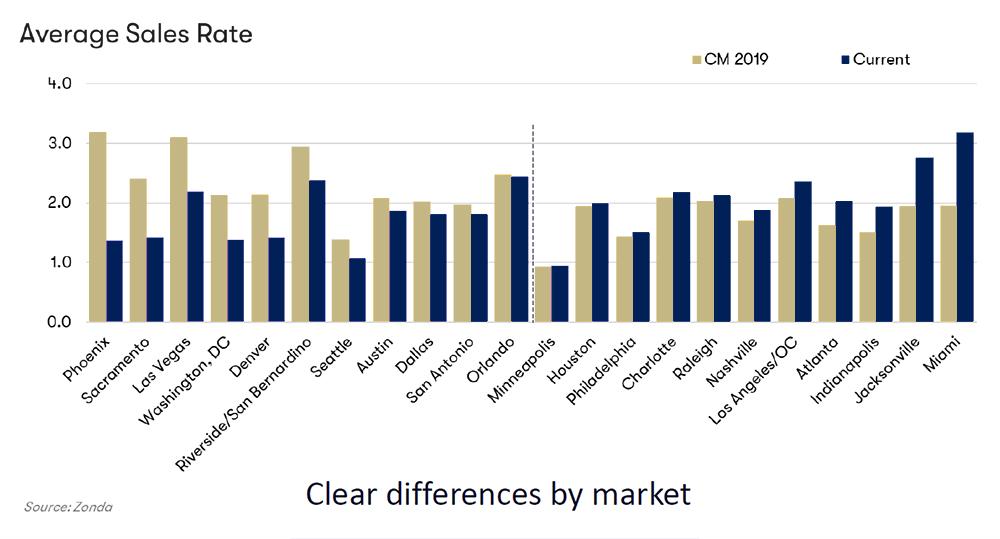 It’s true that, nationally, single-family starts have slowed over the past couple of years, but Wolf emphasized the importance of putting data into historical context. When we do that, we see that starts are in fact about the same as they were in 2019. And that's what we are seeing: 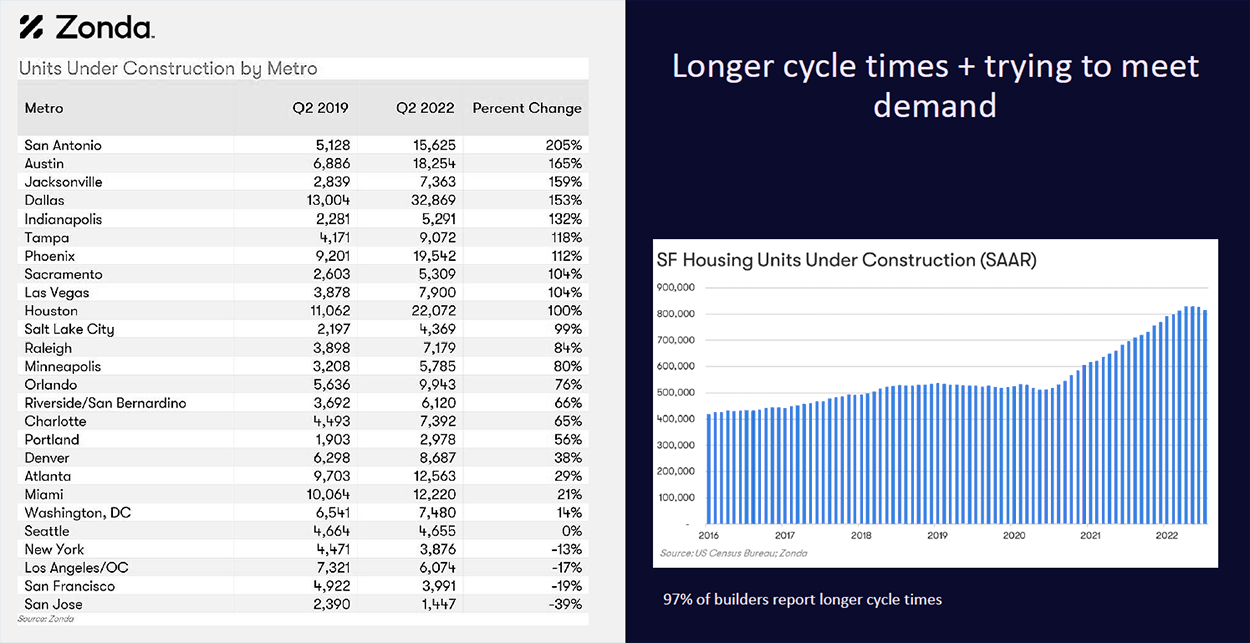 If the sales rate in each market is broken down according to house price, we can see distinct differences in the three price brackets: lower, middle, and upper.

As we delve into the differences in the three price brackets, note that the sales rate of the lower third tends to be higher than in the middle, which in turn is higher than in the upper. For the lower third, the sales rates are between just over 5% to around 1%. In the middle, they’re between just over 3.5% to around 1%. In the upper, they’re between about 2.75% to about 0.5%.

In the lowest price bracket, buyers rely more on their income than on their wealth. This includes first-time home buyers who don’t have equity to put into a new home. So these buyers are naturally more sensitive to mortgage interest rates.

Nevertheless, 23% of the top markets in this price bracket have a sales rate higher than in 2019. The differences are generally small, though — a fraction of a percentage point. Philadelphia is the exception, however. Its sales rate is about a percentage point higher now than it was in 2019. 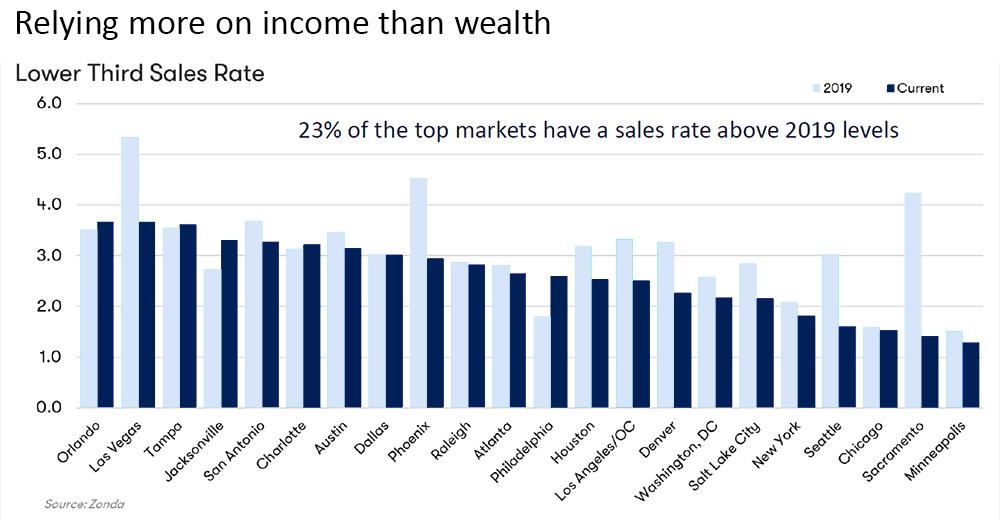 The markets where the sales rate is significantly lower than in 2019 (over a percentage point difference) are: Las Vegas, Phoenix, Sacramento, and Seattle. But Ali Wolf notes that “those were some of the markets that had the most massive run-ups.” There have been smaller drops in Denver, Los Angeles/OC, Houston, Salt Lake City, and Washington, DC.

In the middle price bracket, buyers are a bit less dependent on income and may have some wealth to tap into. These buyers are less sensitive to mortgage rates than in the lower third. (But more sensitive than those in the luxury market.)

In this price bracket, half of the top markets have a sales rate that’s above 2019 levels. The sales rate in Jacksonville and Tampa is significantly higher than in 2019. In the other markets that currently have a higher sales rate than in 2019, the differences are smaller.

Among the markets that have a lower sales rate than in 2019, the biggest drops can be seen in Phoenix, Sacramento, and Salt Lake City. In Phoenix, the drop has been over 1.5 percentage points. 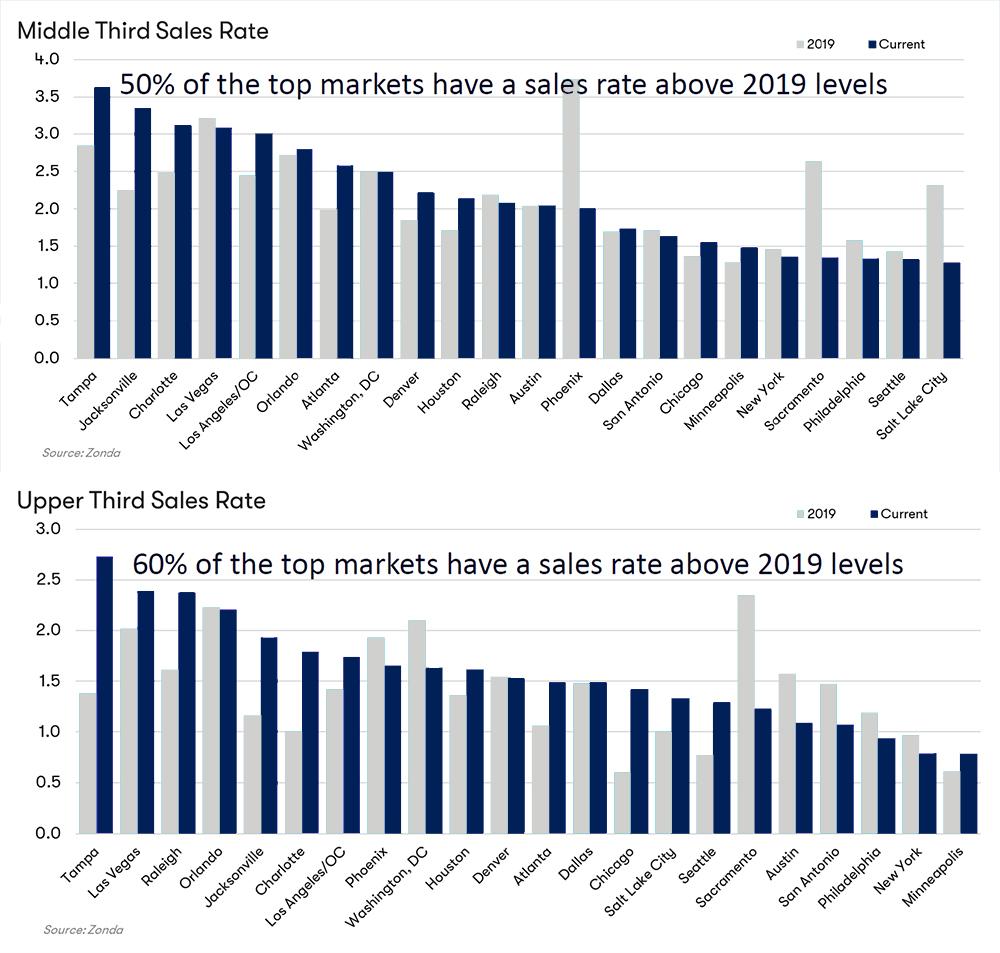 Even though “there have been stock market fluctuations and not everyone is willing to tap their stock holdings, there’s still some outperformance compared to 2019,” Wolf says.

In fact, in the upper price bracket, 60% of the top markets have a higher sales rate than in 2019. The sales rate in Tampa is up about 1.5 percentage points compared to 2019.

In this price bracket, markets that have a lower sales rate since 2019 have generally experienced only a small change. The outlier is Sacramento, which has experienced a drop of about a percentage point. However, recall once more Wolf’s point that Sacramento was among the markets that had a rapid and large price increase before 2019. So it’s unsurprising that it would now be among the markets with the biggest drops in sales rate.

Buyers are currently very sensitive to the headlines, and in September, 93% of builders reported hesitancy from buyers. 77% of builders said that higher interest rates were causing pre-qualified buyers to no longer qualify or to cancel.

However, Wolf reminded us that record numbers of buyers are still interested in buying a home. They may just be sitting on the sidelines for a little while. There’s untapped demand that hasn’t gone away. In this context, she mentioned the ‘lock-in effect’: Homeowners can be reluctant to sell their current home and get a new mortgage at a higher interest rate. But many can be enticed.

The market with the most incentives is Denver, where 97% of projects have incentives. This response makes sense in this market, given that the sales rate there is down 47% since last year and down 72% since 2019.

However, Wolf noted that incentives are not as widespread or as high cost as in 2019. At the low end of the spectrum, in New York, only 23% of projects had incentives. In that market, the sales rate is down only 17% from last year, and is the same as in 2019. (These regional differences in incentives can be seen in the images in our article on regional trends)

When offering incentives, it’s important for builders to be sensitive to their regional market, and also to their customers’ motivations — which differ depending on price bracket. Although some buyers are hesitant, they still want to buy homes — and many in all three price brackets are being persuaded to do so.